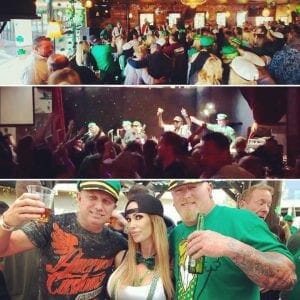 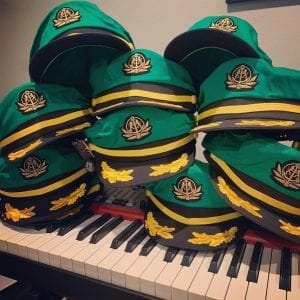 St. Paddy’s day is coming this month!  And, Yachty by Nature comes your way with the best in LIVE yacht rock.  In fact, prepare for us to drop anchor and give you the best 70’s and 80’s yacht rock experience!  More importantly, come see the BEST on the West Coast and all LIVE all the time!  In addition, click here for new MERCH that will have you stylin’ for these special St. Patrick’s day celebrations.  In fact, get your new green hat or break out that hat from last year to represent the green!  At last, get your new t-shirt and know that both white and green captain’s hats are in stock for you.  So, hit us up on the Yachty Merch store!

Okay, let’s get into the dates for one shamrock of a St. Paddy’s Yachty March!  First of all, try some of the options we havefor you.  And, secondly, we hope to see you more than once for maximum fun potential.  As you may well know, last year went absolutely nuts, so we’re really looking forward to fun times ahead!  In fact, look, we’ve smartened up and we won’t be playing twice on St. Paddy’s day but we will play on both the 16th at Sea Legs and 17th at Costello’s.  Besides that, here goes: 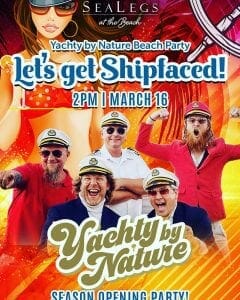 As always, we are adding new tunes all the time.  More importantly, hit us up for song requests and we might just get it done for you.  Here’s that song list link if you’re curious!

Thanks for all the amazing support from our fans!  Two weeks ago, we had an amazing show in Las Vegas at Topgolf.  In fact, we returned later in the week to play for a corporate party for Amazon Web Services over at the Sands Expo Convention Center for about 7,000 employees.  Ultimately, check out our snow day on Thursday and the fact we couldn’t leave Las Vegas.  Oh what a week in Vegas it was.  If you missed the yacht party, stay tuned as I’m sure we’ll return to Las Vegas soon.  And if you feel like driving down to the Colorado River, we play on March 30 at the Tropicana in Laughlin.

Additionally, we had plenty of Vegas and Arizona fans at our last show in Laughlin and the yacht party was alive and kicking that night.  This year, St. Paddy’s month will be fun filled and then some.  Prepare to get yachty and come sail away with us as never before.  Increasingly, the band has just been on fire.

Reminder:  What is Yacht Rock?

As always, we love to educate our fans on Yacht Rock and it’s that jazzy/R&B laced smooth music from 1976 to 1984.  In fact, it is well produced with lush vocals and harmonies and includes those badass session players of the 70’s and 80’s like Toto’s players.  Many of those artists appear on even Michael Jackson’s Off the Wall and Thriller and captivated that smooth sound produced by others like Michael McDonald, Kenny Loggins, Christopher Cross and so many more.  This genre of music was introduced back into the conversation by J.D. Ryznar and his YouTube series titled Yacht Rock.  If you haven’t seen it, it is a must watch.

Of course, he also has a podcast by the name Beyond Yacht Rock and the famed Yachtski scale where they judge songs by whether they make it as Yacht Rock or Nyacht Rock.  As a band, we’ve tried to stay true to the Yachtski scale but we know that our fans love to hear some Nyacht rockers as well to keep the party flowing.  As always, we’ll do our best to provide you with the smoothest in yacht rock and the grooviest soft rock and other tunes that keep the yacht party going.

If you’d like some other creative musings about the genre, there’s plenty!  My favorite list of tunes appears here and here’s the authors of Yacht Rock blog.  In addition, check out some very creative musings https://medium.com/discoverbest-blog/in-defence-of-yacht-rock-c8f575c1f5b1 .  More importantly, find your Yacht Rock jams on Sirius/XM with their station Yacht Rock as well.

For St. Paddy’s day, the band has been on a tear and you just won’t find a nicer crew of sailors than Yachty by Nature.  When I look around, Big Wave Dave keeping us in the pocket and Rim shredding sax over all the smooth.  There’s Doctor Ira just killing it on the performances and you just never know what he’s going to do with a wireless mic and that jazz flute!  Then, Ben Shreddin’ kills it softly with his song and then ramping it up for those Toto solos that will gently melt your face off.  Scotty McYachty absolutely crushing the vocals on everything from Michael McDonald to Hall and Oates and beyond and then rockin’ those crazy Steely Dan bass lines all the while.

And I’m your humble Captain Carl just trying to hang on to those keyboard stylings and solos that our Yacht Rockers have emblazoned into our blood stream and sing a few songs that will anchor us in.  Lastly, I’m so damn proud of these guys for working so hard and being amazing people and playing so passionately for our yacht rock lovers out there.  And, listen to all those Eagles harmonies over everything.  Fact is, it is no small feat so it’s so cool to see us playing amazing venues and stoking the fire of our fans passion for that smooth music!