Above all, thanks to our amazing fans.  Yachty by Nature was voted Best Live Cover Band in OC Weekly.  In fact, the band was nominated in August and the voting ran through September and announced last week.  Moreover, it is a huge thrill to be named #1 Reader’s Choice Cover Band in the Best of edition of OC Weekly.  In addition, here’s a link to the digital edition of this publication.  Thanks to our awesome venues and really loyal fans for taking us to number one!  Keep the fire and keep getting yachty with us.  The band is really working hard and we had a couple shows this weekend that really showed off the depth, the passion, and the incredible yachty vibe.  What an honor and privilege to celebrate with everyone at Back Bay Bistro and Sgt. Pepperoni’s 43rd Anniversary party.

First and foremost, let’s take a look back at one SMOOTH Yacht Rock-tober.  Your Best Live Cover Band YBN began the month in rare form at the Get Onboard for Giving fundraiser at Strawberry Farms.  And, oh what a night.  In fact, it was a great crowd, great cause, and great yachty outfits all around.  Additionally, some serious dance moves were on display for a Thursday night.  By October 5, we were back at the Newport Harbor Yacht Club for another splendid private party in the Yachtiest venue on Newport Blvd.  Another Santa Ana wind driven beautiful night and an amazing crew of sailor hatted and decked out captains and captainettes.  Again, Happy Birthday Eric!  Our yachty peeps danced the night away and we finally brought Footloose back into the set list.  Super smooth.

Best Live cover band off to the midwest

The following weekend brought us on tour to the land of Iowa!  A yachty first, we flew out to the prairie on Friday and enjoyed the casino and sportsbook at Wild Rose Casino in 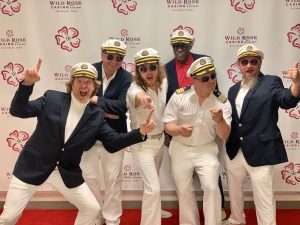 Jefferson, IA.  As well, we celebrated Jonna and Tyson’s wedding and surprise everyone with yacht rock from these sailors imported from California.  Ultimately, the band presided at the grand piano for sing alongs like Lionel Richie, All Night Long.  Our hosts were incredible and we can’t wait to come back to Iowa for more Yachty fun.  Of course, we have another wedding out that way in June!  From the good times of shuttling Ira around the Phoenix airport to chillin’ with the band far from the friendly confines, it was a killer road trip.

It was a well earned weekend off on the 18th and 19th of October and then the best live cover band played a corporate at the Beach House in San Diego for Clio Cloud 2019.  An epic night of yacht rock with the soothing sounds of the Pacific Ocean in the background.  We fielded some beautiful requests for Ambrosia and England Dan for our yachty hosts and big fans of yacht rock.  Very cool to highlight the conference’s last night in California.  Stay Yachty San Diego!

Lastly, we rocked the yacht again right on the water at Back Bay Bistro.  A sold out night of smooth, Yachty by Nature killed it with the costumes and tunes.  With Captain Carl at the helm as Popeye and Scotty McYachty playing Daryl Hall to Jen’s John Oates, the band oozed sultry smooth soft rock.  In addition, Rim’s pimp outfit, Ben Shreddin’ as a member of Flashpants, and Dave’s proctologist outfit let Dr. I remain the lone red jacketed captain.  It was a night to remember, the electric vibe and onslaught of dancers everywhere christened the Halloween eve and savored the smoothness of new tunes like Georgy Porgy.  Thanks for the support and thanks for the fun, Newport Beach!

Capping a busy October, we finished the month at Sgt. Pepperoni’s 43rd anniversary party and fundraiser.  From craft breweries like Gunwhale, Brewery X, and Beach Grease to the Bracken’s Kitchen fundraiser and dunk tank, this Sunday Funday had something for everyone.  In addition, our friends Sega Genecide hit the stage with us to celebrate 43 years of OC’s favorite pizza store.  Thanks to Jill and the crew for an amazing day of Yacht Rock, pizza, beer, and music.  Honestly, those are some really great people, do yourself a favor and get a slice there sometime soon. 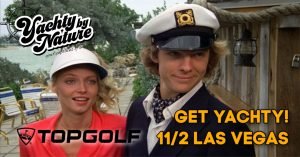 Now, where do we sail from here?  With the Best Live Cover Band award in our hands, we sail off to Las Vegas!  Increasingly, it’s been tough to inform our Las Vegas dinghies and life jackettes that we don’t have a yachty date on the calendar.  However, the time is now and Topgolf is hosting us for a free show this Saturday, November 2.  And, another date coming soon.  Notably, the venue is located behind the MGM Grand just off the strip.  Importantly, get your table reservations or hitting bay arranged now for a yachty good time.  Without a doubt, you’ll need to consult the band calendar for all the cool shows coming up.  In fact, there are many opportunities in November but mostly private shows coming up in December.

Subsequently, without a big Halloween presence on Thursday, this weekend might see some more Halloween costumes and overall yachty attire out there.  Let’s Get Yachty!

As you can see, The Best Live Cover Band is everywhere in November.  Next stop will be November 8 at the Fifth in Anaheim with a $15 cover at the door.  Undoubtedly, one of our really fun venues, The Fifth stops for the evening’s fireworks at Disneyland.  Call for your reservation right away!

Private show on November 9 and then Sunday, November 10 we play for Vet Fest in Manhattan Beach.  Don’t forget to buy your tickets soon for a Sunday Funday and great cause going to celebrate our veterans and first responders.  In fact, tickets are $35 and veterans/first responders are free.  To be noted, Gene Simmons graced us with his presence and a heartfelt talk with the crowd.

Then, we are back to the friendly confines of Daily’s in Rancho Santa Margarita on November 15.  Indeed, Orange County’s Best Live Cover Band is still reeling from last time there.  In fact, they’ve assured us they are ready for a capacity crowd of fun sailors and sailorettes.  Get your captain’s hat and deck shoes ready for a hot one!

In addition, we come back to Campus Jax on November 22 for a yacht rock dance party.  Always a fun one, book your reservation to be comfy, yachty, and above all smooth.

Closing out the month is our annual party before Thanksgiving at Costello’s in Mission Viejo on November 27.  Don’t miss the boat on this one, it’s always a smooth scene.

Again, thanks so much for all the love and making us Best Live Cover Band 2019!