Ahoy all Southern California yacht rockers!  Yachty by Nature is not just one of many yacht rock bands out there.

As you may well know, Yachty by Nature has been around now for 4 years and very proud of the music we bring you.  In addition, we not only look back at some amazing shows and awesome venues but the LIVING tribute that we are.  Importantly, we live for yacht rock, we work hard to play it live and we are so excited about the future of yacht rock bands like us.

Moreover, the music is special, the calendar is only getting more fun, and our fans have been so enthusiastic about it all.  WE LOVE PLAYING FOR YOU!  Additionally, there is a pedigree of yacht rock and we are very proud of what we’ve accomplished:

So, thanks for your patronage and continue to celebrate smooth music with us!  And as always, please let us know which yacht rock songs float your boat.  Moreover, did you know we just added Dreams by Fleetwood Mac, Magic by Olivia Newton John, Love Will Keep us Together by Captain & Tennille, and Ain’t Nobody by Chaka Khan!  Unfortunately, we lost our Dr. Ira on sax and vocals.  Thus, we have been auditioning a female singer, our cruise director Courtney Cruise.  And she’s already sounding great and turning heads.  Thanks for the support! 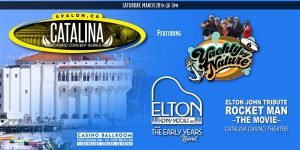 Now, coming up this month we are truly setting sail!  In fact, the band sails to Catalina Island for the second time as we play March 28 in the historic Casino Ballroom in Avalon.  The Catalina Concert Series will feature Yachty by Nature and our support act Elton the Early Years with Kenny Metcalf.  Get your Two Tickets to Paradise and get yachty with us on Catalina.  In fact, it’ll be our own Catalina Wine Mixer!

Importantly, we are coming back to Arizona on March 14 for the Scottsdale Arts Festival!  In fact, we headline the event on Saturday and play at 4pm.  In fact, this is Yachty by Nature’s 5th trip to Arizona and leading the smooth movement out there.  From Topgolf, the Arizona State Fair, to the Strong Beer Festival and now Scottsdale Arts Festival, we are keeping Arizona smooth.  In addition, it seems we’re circling in the same orbit as the “yacht fathers” Yacht Rock Revue.

Last month, we attended their concert in Fort Lauderdale ahead of our show for the Emeril Lagasse foundation.  Additionally, they’ll appear in Phoenix this weekend March 7 at the Van Buren and March 8 in Tucson at the Rialto Theater.  Yacht Rock Revue is based in Atlanta and the self proclaimed “Greatest Show on Surf” has played with John Oates and many of the original smooth artists.  In fact, they got in early on this genre of cruise music way back in 2009. 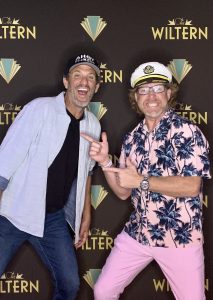 Speaking of yacht rock bands like us, Captain Carl attended the Yacht Rock Revue show again in Los Angeles last night.  In fact, the guys were kind enough to comp us and they crushed it.  The Wiltern Theater was a fabulous venue and the crowd was decked out in yachty gear and feeling the smooth.  Moreover, I’d have to say that opening with Greatest American Hero theme and closing with She’s Gone were killer song choices.  In addition, it’s always fun to be noticed in the crowd for playing in Yachty by Nature.  Of course, with a pink hawaiian shirt 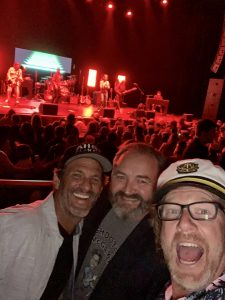 and matching pink pants, I was easy to find!

Importantly, the highlight of the night was Peter Beckett, Eliot Lurie, and Matthew Wilder taking the stage as original artists.  The song Baby Come Back was especially emphatic, emotional, and an interesting ending and the crowd went nuts.  All in all, we’re really stoked for the biggest yacht rock band in the U.S. to be doing well and even coming out with an original album.

Ahoy Los Angeles!  Hey, we really look forward to playing in Los Angeles a bunch more this summer!  In fact, we have been way overdue to play more public shows in the metropolitan area.  Increasingly, it seems we play Las Vegas and out of state gigs more than we play LA but that is changing.  Moreover, our Los Angeles people have spoken and Yachty by Nature is coming to town more often this summer: 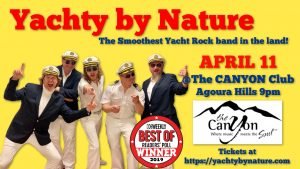 We are so pumped to bring 100% LIVE yacht rock to Los Angeles.  Our show at Whisky a Go Go in December was spectacular and has us wanting more.  In addition, we apologize for not making the trek up from the OC more often.  I know we’ve left you underserved!

Lastly, there’s been a bit of confusion in Los Angeles about yacht rock bands.  Harbor Party is the band that started it all playing yacht rock in Southern California around 2015.  Then came Yachty by Nature in 2016.  In fact, Yacht Rock Revue and Mustache Harbor would make some trips to play shows in LA as well.  And then Yachtley Crew came later on by playing shows in 2017.

Additionally, only Harbor Party, High Tide Society and Yachty by Nature play 100% live in all of Southern California.  These three bands do not use pre-recorded backing tracks.  Thank you to all the fans that know the difference between LIVE and MEMOREX 🙂

In conclusion, we’re heading back to the Midwest in June.  First up is our private party in Kansas City, MO and then a wedding in Okoboji, IA.  Bon Voyage!  Don’t forget to buy your tickets early and Get Yachty with us early and often.  Most importantly, thanks for reading here and thanks for supporting the band.  Keep it Smooth!