Well, it’s been nearly 6 months of Covid 19 and hopefully you’re still on the Yacht!  We can’t wait to say Im on a Boat again.  In fact, it’s really what we all need to keep cruising.  America’s Yacht Rock band, Yachty by Nature is in dry dock, but not forever.  Stay tuned as we are able to add live shows.  Importantly, we observe many of our crew out their on the water these days and getting wet in general.  It’s starting to be a hot summer here in August and everyone is flocking to the outdoors.  Lots of Tahoe, Catalina Island, San Diaaago, and even the roasting out in Lake Havasu.  We hope you’re finding an escape with our music and a watery resort somewhere.

Paramount to the genre, many of our fans keep telling us, “Im On a Boat!”  And. if you haven’t enjoyed the Andy Samberg and T-Pain smash tune, I’ll post it here.  It’s the clean version but watch out for lots of language there. As you can tell, we love dropping anchor in a sea of smooth tunes.  This tune is off the chart for many of our yachty fans and Of course, we’re still pining away for the amazing concerts we had scheduled this year:

And so much more.

So many fun yacht rock shows that couldn’t have been.  Lots of weddings postponed or canceled.  But, remember, we’re still in this together and we look forward to bringing you smooth sounds again LIVE.  Additionally, we hope you’ve joined the few virtual concerts that Yachty by Nature played.  Moreover, our shows at Rancho Fest in June, Whittier in July, and Brea in August were in line with Im on a Boat.

The band hadn’t seen each other since March so June was a bit of a rough sea.  However, Whittier got cruising and we featured our substitute and Courtney Cruise’s sister:  Summer Cruise.  Who knew it’d be such a Summer Breeze but glad you made those performances.  Then, in Brea, we really found a stride and Courtney’s return signaled an epic Set List and I’ll post it here for those interested.  It was a Hot August Night and Brea really had the sound dialed in for us.  Obviously difficult to play to an empty house, but a million thank you’s to joining us!  It means a lot. 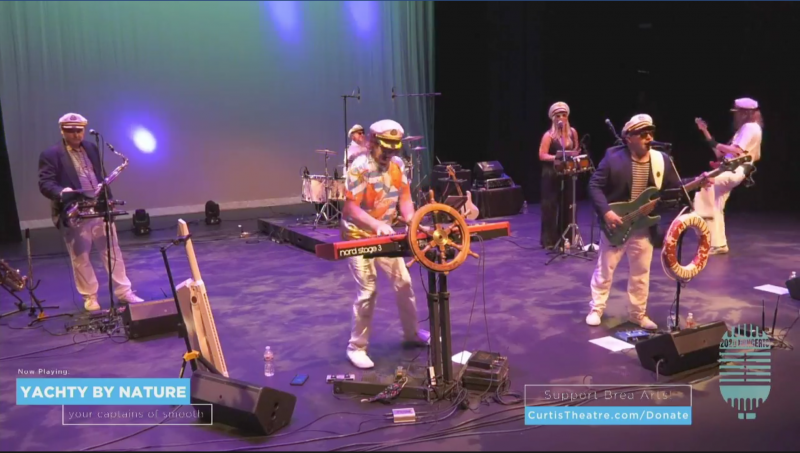 Nevertheless, the band was on fire and the set list at Brea was a hot one!  You can still find the Live Facebook video up on social media or even check out the Yacht Rock setlist we played that night.  It was truly deep in the yacht and a smooth pleasure cruise that was so unique!  In fact, it was a rare one to combine so many deep and yachty cuts.  Go check it out.  Imagine some Captain and Tennille, Olivia Newton John and even Sanford Townsend Band and other rare yacht rock songs.  Our girl singer Courtney Cruise was in rare form and belted out those deep cuts for us in style.

As always keep requesting new tunes for us to play.  You never know when we’ll get your favorite – im on a boat – style yacht song into the mix. Lately we’ve had plenty of success with Carly Simon’s hot hit, You’re So Vain.  Check this video of us crushing it with Courtney Cruise on vocals.  So good.

Hey, City of Irvine is hosting us for a Drive-In Concert on August 29 to finish the summer.  Although we can’t say, Im on a Boat, this yacht band will be rockin’ it LIVE.  Located at the Great Park in Orange County, CA we’ll really be rockin’ the yacht in public again.  Kudos to our Irvine and South Orange County peeps for making it all happen.  The concert sold out for 250 cars quickly but hope to see some more parking lot and drive in yacht concerts.  The trend seems to be going that way and indoor concerts may be a thing of the past for now.  So, for the time being, get it while it’s yacht!  Promising another hot setlist for this show, things are starting to happen, although things are still pretty closed up.

Im on a Boat again!

Speaking of which, we just booked a show up in Northern California.  It’s truly a yacht band show, complete with a big stage on the dock and yacht rock captains and captainettes cruising by.  Wish you could be there, but it’s a private community on the Sacramento Delta near Stockton.  We always love traveling for yacht rock shows.  Above all, we’ll be saying Im on a Boat all weekend long for Labor Day weekend.  For those about to dock, we salute you.  Delta Coves here we come!  It’s going to be one holiday weekend for the books.  We’ve played Northern California before but everyone wants their yacht rock on the water and this band is on it!  If this dock is a rockin’ don’t come a knockin’.

In addition, we’ll be traveling to the central coast in October as well for a private show.  Even during the pandemic, seems Yachty by Nature is the choice of a yacht generation!  Of course, we pair well with a good rosé, but a fine cab as well, but champagne may be our favorite.  As luck would have it, we’ll be popping the champagne at this show for a yacht rock wedding.

In closing, don’t let the pandemic get you down.  Keep listening, stay tuned for upcoming shows, and things are starting to happen.  Have faith, we’ll be back.  Bigger, better, smoother and yachtier than ever.  Activate your playlists and keep it smooth no matter what you do.  Thanks again for all the support and we miss everyone immensely.  Everyone has poured out their longing for concerts returning and there will be some shows this fall somehow and some way.  Keep it safe and healthy and looking forward to getting yachty with you soon.