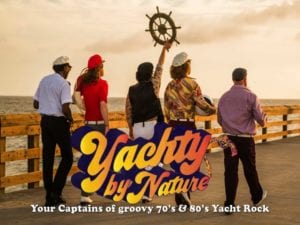 YBN & Yacht Rock Revue.  Southern California is getting ready for an epic weekend in Yachtiness! Obviously, come see Yachty by Nature on Friday @ Costello’s in MV, but if you haven’t seen Yacht Rock Revue, get out there and do it on Saturday 🙂 Link for tickets above and below here.

We’ll be kicking off a big Yachty month this Friday at the friendly shores of Costello’s in Mission Viejo. Importantly, the sax appeal and aural pleasures will be plentiful.  Yachty by Nature’s first class standard of smoothness will abound. Indeed, let’s celebrate ONE YEAR since embarking on a mission to bringing our gold standard LIVE YACHT ROCK to the sexy audiences of Southern California.

Unfortunately, we still find it astonishing that there is a yacht rock band who plays locally using backing tracks.  Albeit, they profess to be the “kings” of yacht rock after only 4 gigs. Now, reality will kick in on Saturday night as the REAL KINGS of yacht rock, Yacht Rock Revue, will be in town at the Roxy Theater in West Hollywood. From the East Coast, these guys play 100% Live and really kicked off the resurgence in Yacht Rock. Hope you have a chance to check Yacht Rock Revue out, they look and sound amazing! Ultimately, most yacht rock bands are paying tribute to the genius of this hot band. One of their most notables is that they were awarded, “Best Place to Get Drunk With Your Dad”! Very smooth indeed!

GET READY to YACHT rock revue!

So, get that Captain’s Hat and your finest boat shoes to hit the deck! You know that we’ll be busy laying down those 70’s and 80’s smooth grooves all of March.  In fact,  we would love to rock your yacht.  Step 1, check the calendar, we’re playing March 17 @ Black Marlin in Tustin, March 26 at the World Famous Swallow’s Inn, and capping it all off on March 31 at Stillwater in Dana Point. Anchors aweigh, it’s gonna be a blast of a month, hope we never leave the Lido Deck. All in all, take the Love Boat if you can but Uber home if you must.

Also known as the Yacht Fathers, Yacht Rock Revue has been bringing the smooth since 2009.  The first to take the YouTube series to the stage, these guys play the Dentist’s Office playlist with panache.  In fact, the Atlanta Journal Constitution wrote Yacht Rock Revue up and even mentioned us as one of the knockoff bands around the country.

YRR and YBN meet up!

Not bad company as these guys tour the country and sell out the big concert venues.  Indeed, a lot of our crowd has been on board with this band for a while now.  Two great tastes that taste great together.  In fact, when we played out in Florida in 2020, we got to meet the singers Nick and Peter and bro out a bit!  They sounded great and glad to see how complimentary and friendly they were to our band Yachty by Nature.

Moreover, to all our Yacht Rock fans out there, STAY SEXY and check out us and Yacht rock revue!

Make sure to click the TAB EPK for all our videos, media, photos, press release items, etc.