Ahoy!  Yachty by Nature has been catching fire again coming into summer 2021.  Importantly, the band turned 5 years old this June!  Yep.  It’s been 5 years since our first show in June 2016 and the FIRST band to play yacht rock on a regular basis in Southern California.  Indeed, we were that band that kicked down doors to a new genre that was rarely played.  Sea Legs, House of Blues, Brooklyn Bowl Vegas, and the home crowd at Stillwater Dana Point.  We are so proud of this band, the fans that are onboard, and the smooth seas ahead.  It’s been a killer ride! 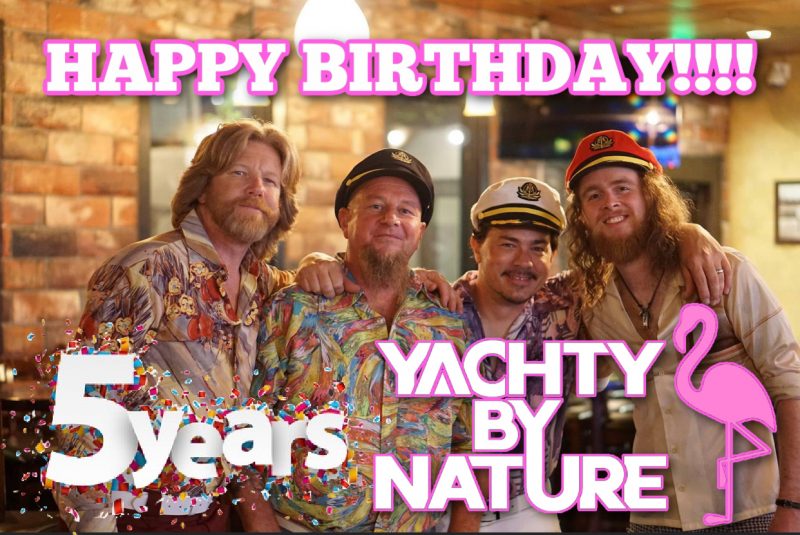 So, let’s cheers to this 5 year smooth pleasure cruise and the places we’ll go this year forward.

Plenty of opportunities to rock the yacht as things have significantly opened up.  In fact, this band has had sold out concerts at OC Tavern, High Park Tap House, Campus Jax, and a packed house beach show at Sea Legs!  As always, thank you for your support.  And, thanks for enjoying live music again with us.  Since February, Yachty by Nature has been fortunate enough to have some live in-person shows with Covid protocols in place.  However, we are so encouraged to get back on the boat again.

Firstly, make sure you are tracking us on Bandsintown so that you are the first to know about our concerts!  Click here to join us there!

Recently, Yachty by Nature played OC Tavern in San Clemente and blew the doors off with a 400 person crowd.  It was so fun to be outside again with a large crowd of yachty rockers!  Ultimately, Sea Legs at the Beach in Huntington Beach on May 1 the next week ramped up for a crowd of about 1500!  Honestly, this was an incredible blowout crowd for our first experience as California began to open up.  What an experience.  Importantly, this crowd showed up to rock the yacht, hungry for the boat concert we’ve been sorely lacking since the pandemic began.  Wow!  It was so amazing to play again for such a blast of an audience.  In fact, check Facebook for a great video of Courtney Cruise cranking it up on Got to be Real!

Subsequently, the band played private shows and a quick trip to Las Vegas in May.  As you can imagine, June 2021 kicked off one helluva yachty summer.  Moreover, we played Lake Arrowhead Concert Series on June 12 to another SOLD OUT crowd.  The show culminated in a 3 song encore with a famously fun audience in the mountains.  WE LOVE YOU LAKE ARROWHEAD!  Lastly, it was incredible to celebrate with our superfans from LA, those who boated over to the show and a wild appearance by Skip n OC in a speedo to sound check.  RARE!  Next up was a private wedding in San Clemente:  congratulations Ryan and Allie, that was a raging version of Regulate by Warren G.  The band finished with our first concert in the park at Bellflower and a return to the friendly confines of Campus Jax for a sold out show again!

As we crack open this beautiful summer in Southern California, a big 4th of July was on the horizon.  Finally, our postponed show at Canyon Agoura Hills was scheduled for July 3!  What a venue.  The band played to a packed house and enjoyed the amazing sound and killer vibe of this Los Angeles concert hall.  Thanks to our LA peeps for coming out to enjoy Southern California’s ORIGINAL yacht rock band.  Can’t wait to return to this place, it was the perfect stage to catch a YBN show.  And, stay tuned for some killer pictures and video.

Next up, the Fourth of July went off.  In fact, the City of Lake Forest played host to 7,000 spectators for the largest yacht rock concert we’ve played!  Lots of superfans there waving their patriotic fervor and dancing to the Guido Shuffle, All Night Long, Africa, Regulate, and some Brandy.  This crowd was ready to get smooth and rock the yacht for sure.  Happy Birthday America.  Yachty by Nature had a blast with our hometown crowd and such a cool experience to have all ages diggin’ the yacht rock scene.

This 4th of July, Scotty McYachty was in rare form and held that note on the Guido Shuffle like a champ.  Let’s face it, he’s the songbird of his generation.  Courtney Cruise wowed the crowd in the red jumpsuit and crushed the vocals on Got to Be Real again to everyone’s delight.  As always, Pacific Rim put on another saxophone clinic as he proved once again to be the Saxiest Man Alive!  Ben Shreddin’ capped off the evening with the hottest energy on Come Sail Away there’s ever been.  In fact, the crowd went nuts as they sang Come Sail Away with us right into a legendary fireworks session.  Big Wave Dave had the beefiest kick drum of his career and locked us down for one bouncing bunch of boaters.

And lastly, Captain Crowd punctuated the patriotic party by running through the throng of revelers on the lawn while rapping to Regulate!  Hope you guys had fun and we can’t wait to have more concerts like this.  Cheers.

First, make sure to TRACK us on Bandsintown as I wrote earlier.  Secondly, mark your calendar for the public shows below.

Make sure to rock the yacht with us at least a couple times this summer.  There are more shows and adding events all the time, so check in with us 🙂  Most of all, enjoy the yacht rock music and let’s celebrate getting to see each other more often and those bright smiling faces again.  Obviously, it’s been a tough year for so many and we just love what we are doing and hope you can enjoy the music with us soon.  In advance, hit our Merch Booth up and get outfitted with the latest in yachty gear!