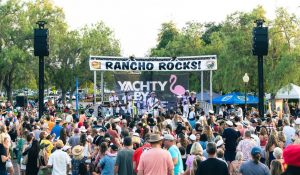 Ahoy, yacht rock music lovers!  Yachty by Nature just celebrated it’s 6th birthday in June and this summer has been one for the record books.  In fact, we’ve had some pretty huge summers.  However, Summer of ’22 proved to be a hot one so far.  With two years of limping thru the pandemic, this season of smooth showed that everybody was truly ready to get out to experience the fun live concerts we’ve been missing since Covid 19 shut so many shows down.  Ultimately, the band has been having fun on the road, but we also returned to the fun park shows and the busy schedule that keeps that boat afloat. 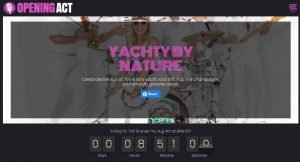 First of all, THANK YOU so much for voting each day to help us win a spot as Opening Band at the Hollywood Bowl.  We are currently in the top 10 in our group.  Make sure to vote today for DOUBLE credit!  In fact, you can vote once per day and help us win $10,000 as well.  Please vote for us and scroll down to where it says VERIFY ON FACEBOOK and you’ll be able to vote for us!  Wouldn’t that be the ultimate bringing Yacht Rock Music and your captains of smooth 70’s and 80’s soft rock to one of the most historic stages in the world.  Moreover, keep up the great work.

As always, you’ll never hear exactly the same smooth setlist with Yachty by Nature!  We constantly love keeping the set fresh and mixing new and old songs into our concerts.  Importantly, at OC Park’s summer show, we opened with Takin’ it to the Streets by the Doobie Brothers.  It was a joy to watch our seasoned super fans shocked that we didn’t open with Ride Like Wind.  That Christopher Cross gem has long been a staple intro for us.  In fact, drop us a line, a text, a DM to let us know which song you’d like us to begin with.

Speaking of which, our OC Parks show at Mason Park got us off to a smooth and yachty start to July!  What a cool venue, great crowd and a blast to see everyone get up and boogie to Kenny Loggins’ Footloose.  We were able to keep the easy listening early set with masterpieces like Baker Street and Don’t Go Breakin’ my heart.  Additionally, the band caught fire ramping up the close of the set with Africa, Regulate, and Ain’t Nobody.  Does Courtney Cruise bring it on Chaka Khan or what???  Anyways, that was a glorious July 7 and we were coming off a beautiful 4th of July at our buddy, Mark Sanchez’s house and July 3 at the Beach Club in Pacific Palisades.

Next up, Yachty was seen in Corona del Mar at 5 Crowns for a yacht rock wedding.  Natasha and David’s wedding was a blast and the food was off the hook.  What an honor to celebrate them in style.  The next week saw Garden Grove cutting a rug on the lawn at Eastgate Park and Rancho Santa Margarita packing their park with about 3,500 hardcore soft rock fans!  Oh what a Night!  Once again, the band launched into Come Sail Away as an encore.  Ultimately, the crowd began waving their phones’ flashlights in the air making for a highlight of the summer.  What a feeling out there and we always appreciate the big love in RSM.

Yacht Rock Music has seen a meteoric rise across the country lately.  However, it’s not just California that’s getting Yachty.  In fact, Yachty by Nature has been the most sought after Yacht Rock act in the nation, second to only Yacht Rock Revue!  Moreover, we found ourselves on a plane again to Jacksonville this time for a concert in Amelia Island, Florida.  What a glorious place for smooth music to fill the air.  The powdery white sands on the beach and the resort feel out there was a nice counter to the oppressive heat and humidity inland.  Apart from the travel difficulties that Rim and Scotty experienced and narrowly missing the show, our weekend in Florida was grand!  Thank you to the Georgia Dental Association for all the fun, good vibes, and southern hospitality.  The boat bar in the middle of the party especially said, “I’m on a boat”.

If dropping anchor in Florida wasn’t enough, we had to get right back to California for another corporate party at the Waldorf in Dana Point.  The MBA had a beautiful spread on the grand lawn and what a beautiful night at this 5 star jewel of a resort.  We loved meeting people from all over the United States and new and old fans of yacht rock music!  Specifically, we found a crew from Atlanta who were already sailing far and wide. 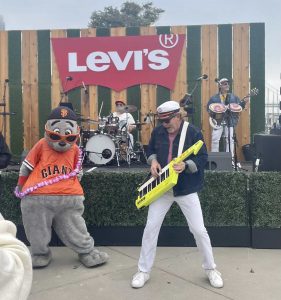 We had the rest of the week to rally and prepare for a Friday Night with Levi’s and the San Francisco Giants at Oracle Park before the MLB baseball game!  Wow.  The band setup right on the San Francisco Bay and the Giants/Cubs game attendees cruised through the yacht rock party just outside the park.  What a thrill and we even danced with their mascot, Lou Seal.  To celebrate the sponsorship from Levi’s, the band was decked out in denim.  The jean jackets were on fire with our brand of SMOOTH.  Giants and Levi’s even gave us Captain’s Hats with the San Francisco Giants color and logo.  Too fun.

Sadly, we returned from the Bay Area with a sick Scotty McYachty and we had to do a very rare thing.  We were forced to cancel the Sea Legs show on July 30.  This would have been the crowning glory of a wonderful Summer of 2022.  This venue is right on the sand and such a fun spot that we probably had well beyond our typical 1,000 people preparing to attend.  Thanks for everyone’s patience and a heartfelt sorry to those people who showed up and didn’t get the word of the canceled show.

It was agonizing for everybody and we thank the JettHeadz for putting on a great show as our opener.  In addition, we were lucky enough to get the 90’s RockShow and Offsprung to play in our absence and hold the crowd that came out to support us!  Cheers!  Importantly, Yachty by Nature will return to SeaLegs on October 8.  Moreover, mark that calendar. 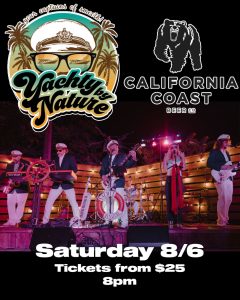 We are scheduled for the City of Corona concert in the park on August 4 and then a huge show in Paso Robles on August 6!  In fact, we are super pumped to return to wine country on the Central Coast for a return show at Cal Coast Beer in Paso.  Last year’s show there was a blast and we really love this town.  Yacht Rock music goes over huge there and we loved that crowd and venue.  Get your tickets and plan to be with us, even if you are in San Luis Obispo or surrounding cities.  Additionally, come up for a killer weekend!

Let’s see where the band will drop anchor next.  In fact, we return for some Los Angeles dates.  Check the links and see which cool venue that you’ll get Yachty with us at:

8.13, Santa Clarita Concert in the Park

In closing, we’d like to thank you for all the love and support.  Moreover, let us return to lots of exciting shows and venues.  Importantly, the band is on fire and playing on the next level.  Keep the fire! In fact, Stay Yachty with us and we look forward to seeing you soon!  Overall, check out our LINKTREE site.  Ultimately, you will find even easier ways to connect with the band.  As a result, check the calendar and stay informed for great yachty happenings.

Lastly, we do have some honorable mention events coming up.  In fact, we head up to the Bay Area again for that show in Bethel Island again.  In addition, the following weekend features YachtRocktober Fest with the Biergarten at Old World Huntington Beach.  Then, the Original Lobster fest is happening and we are on the bill for Sunday, September 11.  Importantly, we return once again to the friendly shores of Disco Bay on October 1.  Yes, Discovery Bay is getting Yachty and our concert will be at Campos Family Winery.  As stated earlier, we’ll be at SeaLegs in Huntington Beach on October 8.  Lastly, the band returns to Palm Springs to headline the Circa Caliente event on October 15.  In particular, make sure you get your tickets for Circa as soon as possible as it will sell out fast!

Of course, we will post reminders.  However, add to your list the fact that we will be back to Campus Jax on October 28 and then Daily’s in Rancho Santa Margarita on November 19.  That’s a lot of great yacht rock music for your listening and grooving pleasure.  Cheers and Ahoy!

Throwback to opening for Snoop here!