Everybody has a favorite when it comes to best yacht rock songs!  Or, do they?  First, you gotta KNOW what tunes from the mid 70’s to mid 80’s make the cut as SMOOTH.  Then, you’ll have to struggle through the decision on which song truly floats your boat.  This bevy of lushly produced, jazzy, R&B jams by the best session musicians of the decade make it a brutal choice.  In fact, selecting your fave guilty pleasure from a genre ubiquitously represented on TV, film, commercials, and now yacht rock radio can be downright splitting hairs.  Lastly, there have been a million articles written on the topic, but rarely do you hear from one of the top cover bands in America.  Let’s dive in.

What a Fool Believes

If you pay attention to the Yachtski Scale, there’s only ONE perfect score for best yacht rock songs.  That song is

What a Fool Believes by the Doobie Brothers and scores a perfect 100.  Factually, JD Ryznar and his fellow pioneer en-smooth-iasts CREATED this genre.  They wrote the YouTube parody of the musical genre back in 2006 that launched the entire movement.

Subsequently, they assert that the personnel, the style, the writing, the lyrics, the instrumentation itself, and the famous Doobie Bounce of WAFB presents the ideal materialization of SMOOTH.  Indeed, this tune begins with that bouncy, syncopated e-piano that the creators of Yacht Rock love.  Importantly, the buttery smooth Michael McDonald vocal, the jazzier chords, lush harmonies, and simple lyric of romantic regret registers as the north star that our yacht rock compass points to.  When in doubt, pull up anchor, batten down the hatches and sail in that direction.

Can you Sail to it?

Now that we have a baseline for the best yacht rock songs, let’s set sail!  Ahoy.  In order to steady our course, watch out for the obvious bogies, buoys, icebergs, and misgivings.  Not all of our favorite 70’s and 80’s songs are verified yacht, so let’s be aware of what the purists of Yacht Rock say.  First, they say the song Brandy is too early to be considered.  It only registers a 36.83 on the scale (under 50 points is labeled Nyacht Rock).  Feel free to read about why one of the world’s favorite captain songs is not technically on the boat.  They’ve written a healthy article on the subject!  In fact, Hall and Oates only made the cut with a couple tunes like Kiss on my List.  Even Little River Band, Ambrosia and others barely make the cut.

Of course, if we go by the rules, all songs by the Eagles, Fleetwood Mac, and Jimmy Buffett are completely out.  Ultimately, now we can focus on the pillars of that Yachty sound.  Toto and all their personnel, Michael McDonald, Christopher Cross, Kenny Loggins, Boz Scaggs, Steely Dan, Pablo Cruise, and George Benson are among the undeniable superstars of smooth. 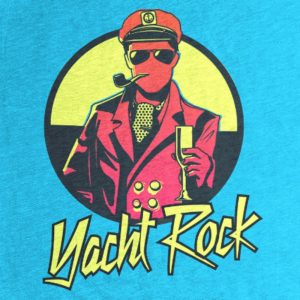 Okay, time to choose.  Do the main heavy hitters make your list?  Africa, Rosanna, Ride Like the Wind, This is It and Lowdown are always crowd favorites.  But is your fave a deep cut like Who’ll Be the Fool Tonight by Larsen/Feiten Band?  Or do you go against all the Facebook group posts chiming in about how they hate the Piña Colada song?  Or Georgy Porgy… or the dreaded Answering Machine Song by Rupert Holmes?  If you’re like me, I go headfirst into those songs and appreciate the pure joy of Escape, which is a notoriously Nyacht song.  This begs the question, do I have to stay to the strict list of the purists who made the Yachtski Scale?  Or can I venture into the songs that just float my boat and keep me sailing.  Ultimately, it’s your choice.

While the Yacht Rock guys have rated some 400 songs, there’s plenty out there.  So feel free to improvise your top ten list of tunes that support your dancin’ on a yacht, sippin’ boat drinks and swaying to the palm trees good times.  Whether you’re a purist or freelancer out for the feelgood vintage party, there’s something in there for everyone!

Ultimately, we hope this resource helps you find a way to your yacht.  Sailing, grooving, and overall jamming to the smooth sounds of the 70’s and 80’s doesn’t have to be one speed. Actually, there’s a lot of help in your quest.  You can listen to yacht rock radio.  Or, read articles like Captain Carl and his Top 8 best yacht rock songs and more. And even check out an amazing look at the comedy and meaning of the smooth top 100.  Of course, there’s Spotify, Sirius/XM, and YouTube galore.

Lastly, we hope you’ll come check a Yachty by Nature show and get to experience the thrill of LIVE yacht rock and the party of it all.  The band will surely play a bunch of your favorites and hit some deep cuts as well.  With Captain Carl at the helm, it’s always a great time.  Add the cruise director, Courtney Cruise and Scotty McYachty’s golden vocals and it’s ON!

Speaking of which, here’s the top 10 picks from Yachty by Nature for your listening pleasure.

So, what’s your jam?  Surely, you have plenty of food for thought and a first class approach and background to choosing that tune that raises your sail.  Let’s salute those about to dock and get listening, participating and overall celebrating the smooth music that puts a smile on our face.  Cheers to your best yacht rock songs and feel free to send us an email, post here, or connect on social media to let us know what you’re listening to.