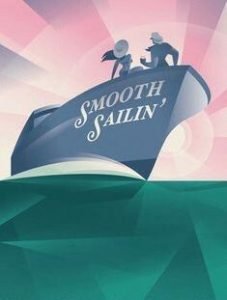 Ahoy, let’s talk about Yacht Rock!  Even better, let’s talk about the music from the perspective of a working crew of Yachty musicians.  The captains of smooth here at Yachty by Nature have been working at the art of 70’s and 80’s soft rock-ish hits since 2016.  In fact, our origin story can be found on this link.  It’s a pretty interesting read!  It’s been kismet.  Working with amazing musicians and rockin’ epic vintage tunes!  And, playing to crowds hungry for well-done Toto & Steely Dan tunes has been magic.  Ultimately, we celebrate the smooth songs, the groovy vibe, and hardcore soft rock, in general.

What is yacht rock?  For the purists, it’s the smooth, lushly produced, jazzy and R&B-tinged music emanating from the years between 1976 and 1984.  In fact, the originators of the YR label have rated some 400 songs based on their Yachtski scale.  Yes, you can find out exactly how Yachty a song is!  Simply check out JD Ryznar, Hunter Stair, Dave Lyons, and Hollywood Steve’s rating scale.  Importantly, these are the guys that created the 2006 YouTube series of the same name.  This show launched the idea of a smooth rock genre in the first place.  For any depth on the subject, these are required viewing and reading.

Let’s take a look at some of the KEY elements of the genre.  First, the Doobie Bounce and complicated musical arrangements featuring Electric Piano, guitar and some sax.  Also, look for the contributions of Kenny Loggins, Christopher Cross and Michael McDonald and that studio polish of session musicians like the musicians in Toto.

First, the Yachtski Scale places the 1979 Doobie Brothers recording of What a Fool Believes as a perfect 100.  That Doobie Bounce and the syncopated E-piano line give it that yachty feel.  In addition, the buttery Michael McDonald vocal exhibits the ultimate in smooth groove.  Other notable and high scoring songs would be Rosanna by Toto, Kenny Loggins’ This is It, and Christopher Cross’ Ride Like the Wind (all 98+ points).  Conversely, let’s look at the lower end of the spectrum which is a minimum score of 50.  Little River Band’s hit Reminiscing just makes the grade with a score of 51.75.  Lastly, Captain & Tennille’s Love Will Keep us Together, ONJ’s Magic, and even Warren G’s Regulate just make the cut.

In the past, such songs may have been labeled Dad Rock, songs from the dentist chair, or even Yuppie Rock.  However, the resurgence of these smooth cuts seems right on time.  Escaping the perils of world tumult and a worldwide pandemic have only increased the need for this music.  In fact, the genre seems to be equal parts here.  Guilty pleasures from the past, the zenith height of record making, and a genre ripe for campy fun and self deprecating wit and fun.

Subsequently, the genre takes on an air of “don’t take yourself too seriously” and channels an energy that Ron Burgundy’s playlist would be proud of.  In fact, the cast of Anchorman croons an acapella version of Afternoon Delight in the movie and offers us great inspiration.  Likewise, the Andy Samberg gem, “I’m on a Boat” seems to say that we all want to wear a captain’s hat live the Yachty life!

For the more laid back listener, many have found Yachty songs that flow ubiquitously from Yacht Rock radio stations.  In fact, Sirius/XM committed to the genre back in 2016 and Amazon, Spotify, and Apple have plenty of offerings.  This preponderance of radio airplay and playlist popularity has certainly led to a much more liberal interpretation.  Indeed, many of those new to the boat are finding it difficult to discern songs Yacht or Nyacht.

Curiously, on the Yacht Rock Facebook page, there are daily arguments about the songs that make or miss the grade.  In fact, there seems to be a constant education to which many newcomers to the genre simply reject a stiff rating system.  Often, they favor notably Nyacht Rock songs like the Piña Colada song, most of Hall and Oates and certainly Fleetwood Mac and Eagles tunes.  Even more disconcerting to purists may be the assertion that Jimmy Buffett tunes should make the boat! 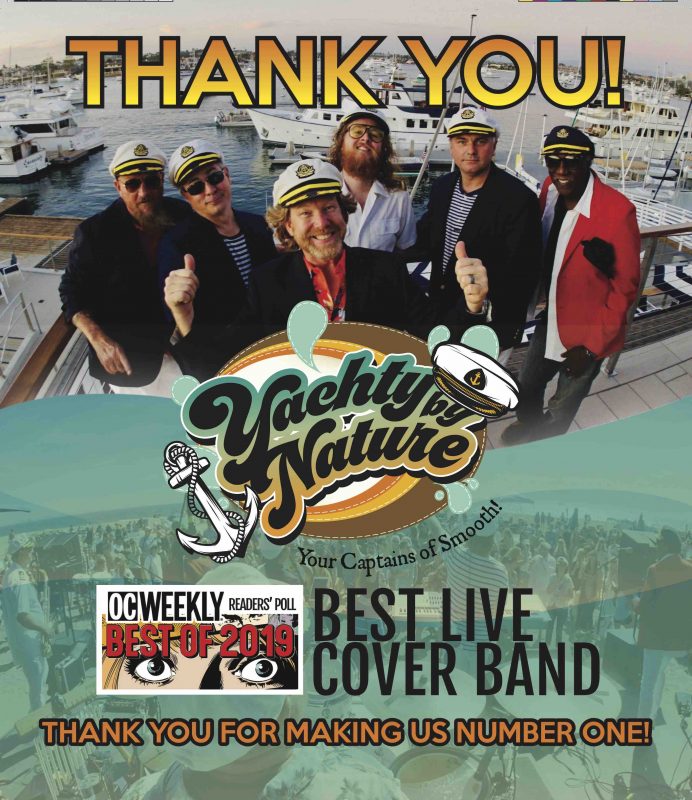 Far back in 2011, I was playing keyboards in an 80’s band.  Remarkably, we stumbled on the term Yacht Rock from a hipster girl at an LA party.  This was the start of something truly HUGE.  Myself, Captain Carl and our singer, Scotty McYachty began playing Yachty songs at sound check with our 80’s band.  Slowly, that morphed into creating a new band in 2016, naming it Yachty by Nature and the rest is history.

When the band was formed nearly 7 years ago, there were really no other working yacht rock bands in Southern California.  However, the bands High Tide Society in San Diego and Harbor Party in Los Angeles were doing some local shows.  As well, the band Yacht Rock Revue were the Yachtfathers of covering smooth music and doing nationwide shows since around 2009.

Ultimately, we began to conquer Orange County and turn heads when this crew of captain-hatted musicians grew to play not only House of Blues, but travel to the East Coast in 2017.  Quickly, we became a juggernaut on the national YR scene.  By 2018, we appeared on the Rich Eisen show, opened for Snoop in 2019 and won best OC Cover Band, and made the KTLA morning news in 2020. So, check the calendar and join the fun of this one of a kind Yacht Rock band.

Apart from the music, the vibe is contagious.  Ground zero for the mojo of yacht rock seems to be 1978 Marina del Rey, CA.  In fact, this is where you can imagine the smooth music gracing the airwaves of LA.  The music readily provided that  “escape” or “departure” from the drudgery of day to day life.  The fun vibe follows pop culture features such as Love Boat, Caddyshack, Step Brothers, Ron Burgundy, etc.  And there’s the crossover stuff like Will Ferrell appearing on Jimmy Fallon as Ron Burgundy singing Ride Like the Wind with Christopher Cross!  There ya go.

Of course, that vibe, music and even outfits related to these shows are easily attached to Yachty good times.  Therefore, you may see Yachty outfits resemble Love Boat and Caddyshack at Yachty concerts.  Along these lines, check our post on yachty attire to get your outfit going. 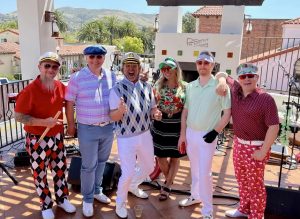 As you can see, the music is paramount.  However, the yacht party surely involves the outfits, the captain’s hats, and the overall escapist and thematic fanfare.  As such, our band often plays for yachty themed parties where the fun of the yacht party goes to a new level.  That flair draws inspiration from 70’s and 80’s album covers and the smooth imagery of flamingos, anchors, and palm trees.

Coincidentally, take a look around and you’ll see a huge influx of Hawaiian shirts and very yachty garb.  Truly, we live in a very Yacht Rock world.  As a result, you should take notice of newer yacht bands like State Cows, Norwegian Fords, Page 99, and Young Gun Silver Fox.

Lastly, let’s chime in from the band Yachty by Nature.  As a working band, our song choices can really veer from the strict rating scale of the purists.  However, we love to hit the anthems like Africa, Steely Dan’s Peg, Rosanna, Lowdown, Baby Come Back, Hold the Line, and Sailing.  Those are all strictly on the yacht and define the sound.  Importantly, we get a kick out of going deep in the yacht.  We proudly play Smoke From a Distant Fire, Dr. Hook’s Sexy Eyes, and Lotta Love by Nicolette Larson.  Add in some Pablo Cruise, Lionel Richie, and Boz Scaggs and the Yacht Rock Show is onnnnnn.

As you can imagine, we do play some notoriously Nyacht rock songs for our energetic public.  Songs like Brandy have been rebuked by the purists but it is a sinful delight that our crowds love.  Additionally, Hall and Oates always floats the boat.  We play Kiss on My List, Maneater, and Rich Girl to the appreciation of our big crowds.  In fact, the Styx hit Come Sail Away has been a long time favorite to close the concert out.  Our revelers will typically light their phones up and sway to the tune that is considerably far off the yacht.  Smooth music can roll a bit mellow and cruizy.  Thus, kicking it up with these songs certainly embody the fun of the genre but might not check all the boxes.

The bottom line is that Yacht Rock is fun.  Whether you make your own choices of what’s on the boat, the movement and music is a blast.  Yachty by Nature continues to play from SEA to shining sea.  The outpouring of love has been mind blowing.  This summer we played the Bay Area 5 times and Denver and Florida as well.  Lots of great shows coming up, so see you soon!  Hey, quite often, we hear from our fans that we are one of the rare bands playing the music all LIVE.  In fact, a lot of bands out there are still relying on pre-recorded backing tracks.  What a bummer.  These vintage cuts are fully meant to be played by live musicians and not like Milli Vanilli.  Thanks for appreciating this group of 6 musicians playing ALL the notes.  We are having a blast!  Stay Yachty my friends.