Yachty by Nature is coming to Yacht Rock San Diego like they’ve never been rocked.  February 10, Southern California’s #1 smooth soft rock band comes to Pala Casino and Resort in San Diego County.  All your 70’s and 80’s guilty pleasure jams will come alive again.   This talented band of sailors takes you on the pleasure cruise of your life!  Fresh off a busy 2022, the band played 65 shows from Sea to shining Sea.  In fact, Yachty by Nature booked Pala for the first time back in April of 2020.  Unfortunately, the show was postponed due to Covid 19.  Don’t miss the boat.   In fact, make sure to get your tickets and room reservations immediately!  Pala is a huge venue.  Put on your captain’s hat and Ride Like the Wind to this next level concert.

2023 marks the 7th year of our existence.  Happy Birthday to your captains and keep the fire burnin’!  Highlights from 2022 keep shining bright.  We always wonder what venue sparks your hottest memories of us getting Yachty.  In our Instagram post the other day, a few venues popped.  Of course, Sea Legs grabbed the top spot for number of mentions.  Honorable mentions in the hearts of our fans were:  Vegas, Arizona, Paso Robles, Biergarten HB, Rancho Santa Margarita, and Catalina Island.  Of course, that time we played in my backyard at the Hacienda received a few standout exclamations.  Last year was the year we came out of Covid 19 and it was so refreshing to get back in the limelight again and our crowds never disappointed.  Thanks for the support!

As always, we’re trying new things and adding new songs and venues.  Keep that support alive and know that we truly LIVE the yacht rock life whether it’s San Diego, Los Angeles, Paso Robles, San Francisco, Arizona and beyond.  This year, the band journeys to the Bay Area, Idaho, and more Florida.  When it comes to Yacht Rock Cover Bands, this band certainly knows how to entertain.  In fact, the big mentions of Yachty by Nature keep adding up!

In our 7 year history of being the #1 soft rock band in Southern California, the ride has been fun!  Our fans really made us stand out early and often.  Pioneering the genre as the first yacht rock band in Orange County, we quickly played on the East Coast and things were happening out there.  In no time flat, OC Weekly rated us the best cover band in 2019.  In addition, the band found itself on the popular Rich Eisen sports show.  Then came a feature on KTLA morning news with Sam Rubin, Henry DiCarlo, Chris Schauble, with Megan Henderson.  Yachty by Nature even opened for Snoopadelic at Nood Beach on the Sea Legs property in Huntington Beach.  Our crew of smooth sailors received acknowledgement and kudos by JD Ryznar and Hollywood Steve Huey who were the originators of the term, “yacht rock”.

Sometimes When We Touch

Despite the magnitude of all these achievements, we recently hit serious pay dirt for the genre that we passionately emulate and tribute.  Ultimately, the new soft rock documentary that catalogues the rise, fall, and resurgence of 70’s and 80’s smooth music recently came out.  Interestingly, we make the opening preview and third part of Sometimes When We Touch which is available streaming on Paramount Plus.

We hope you have a moment to check out this in-depth look at soft rock/yacht rock.  Early on, Captain Carl rocks the yacht in a clip from the Rich Eisen Show.  Later, Scotty McYachty croons the anthemic chorus of Toto’s Africa.  During which, Carl moonwalks across the stage at Sea Legs’ Anti-NYE party.  Although the features were short, we were the first Yacht Rock Band to be shown in each segment.  Moreover, our fans were thrilled to see us included on such a popular and deep dive of our genre.  The band jumped for joy at such a glorious prospect.  We’ve done a remarkable thing here folks!

San Diego is one of those places where the band plays a lot of private shows.  Yachty by Nature looks forward to playing a lot more public shows for our fans out there in 2023.  Pala Casino and Resort will be a huge step in that direction.  We look forward to seeing you out there for a huge concert.  Don’t miss the boat on this one.  In fact, keep up with us on social media, here on the mailing list and the Bandsintown App.  In fact, do yourself a favor and Subscribe to our YouTube.  Additionally, the Linktree site has all of our links across the board!  Go ahead and subscribe there too 🙂

Yacht Party with Yachty by Nature 2023

The yacht party here at Yachty by Nature started in 2016.  In fact, we are turning 7 years old this year and it’s going to be BIG!  Get on board for some exciting concerts coming up.  2022 was a banner year.  Ultimately, we got yachty in Florida, Colorado, Catalina Island and 7 shows in the Bay Area.  This yacht rock band has been BUSY!  Moreover, we thank you so much for your support and appreciate all the fun shows at Sea Legs, Stillwater, Cal Coast Beer in Paso Robles, Delta Coves, Biergarten HB, Daily’s RSM, Rooftop SJC, Black Marlin, Campus Jax, and so many outdoor summer shows!  In addition, our private and corporate parties have been a blast!  Let’s continue this groove and let that vibe and yacht party FLOW!

Although we didn’t do a ton of boat shows this past year, it’s always on the horizon.  Catalina Island’s show was as yachty as it gets!  Amazing to play out there on Descanso Beach and that seaside, island vibe of Avalon!  In fact, we did play aboard a 300 foot boat in the San Francisco Bay in May.  Additionally, the yacht club scene was stout with many shows at Newport Harbor yacht club.  Once again, we did climb aboard the Hornblower yacht in Newport Beach.  So, whether you’re on land or sea, we definitely bring the Yacht Party and your guilty pleasure 70’s and 80’s tunes.

Did you know!  We finally re-booked our Covid canceled show from April 2020 at Pala Casino and Resort!!!  This will be HUGE.  We’ve been waiting for 3 years to get back to this awesome venue and so you don’t want to miss the boat!  Make plans for Friday, February 10 at 8pm.  Tickets are $15 and you won’t find a more perfect place to bring the yacht party inland and do some gambling too.  We are so excited to finally bring Southern California’s #1 yacht rock band to Pala Casino.  We’ll be on the same stage that will feature Kenny Loggins, LeeAnn Rimes, and Michael Bolton this year!  Distinctly, we remember all the fans that were primed for that Pala 2020 show.  Come Sail Away!

Once again this year, we take the yacht party to Fort Lauderdale for the Emeril Lagasse Foundation fundraiser.  January will be a fun one with a stop in Florida.  They do an amazing job inspiring, mentoring, and enabling youth in the culinary arts.  As always, we love to support our clients especially charities so feel free to check out their philanthropy and donate! 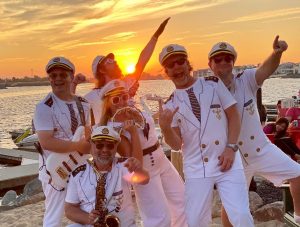 As always, 2022 brought us to new fans, new venues, and plenty of new songs.  As you can imagine, we’re always tinkering with new songs to invigorate our concerts.  Importantly, some of the new material hit hard stretching out on such songs as Dancing Queen by Abba, This is It by Kenny Loggins, You Can Call Me Al by Paul Simon, and Help is on its Way by Little River Band.  Thanks for always suggesting such awesome tunes and we always do our best to get your requests in.  Ultimately, there’s no Yacht Rock Band as prolific as Yachty by Nature and our commitment to smooth comes with passion, drive, and dedication.  Let’s Get supremely Yachty this year.  It’s all about the Yacht Party!

Saturday, May 30, Yachty by Nature was live streaming again.  YouTube came alive with the sounds of yacht rock and your favorite 70’s and 80’s soft rock hits.  In fact, we debuted our newest recording of a song from our homes and show off the serious smoothness.  We couldn’t wait to share the split screen video with you.  This was recorded from isolation during the Covid 19 pandemic.  The band is dying to play for you live and we’re almost there it seems.  Ultimately, hang in there and know that we’re in this together.  Importantly, we’ll return to the summer smooth cruise once again soon.  It’s been a trying time for everyone.

We just hope that everyone is hanging in there and staying safe, healthy, and ready to rock the yacht again.  Through this extraordinary time, it’s been amazing to see our fans.  You’ve been supporting us on the Virtual Concerts, streams, and continued fun posts.  Keep up that phenomenal support!  In addition, get your captain’s hats ready for one boat shoe extravaganza when we get back to fully live appearances.  After the youtube yacht rock days of streaming are over…

We’re still crossing our fingers for the upcoming concerts in July but all live shows are postponed and canceled through June.

Thanks again for all the support during Covid 19.  Interestingly, we rode several waves of openings and closings.  However, publishing some of those YouTube nights of music was so fun and got us out of the doldrums.  In fact, once we got to the Virtual Concerts and then finally back to live it was such a relief.  We’ve been so grateful ever since.  Now, make sure to SUBSCRIBE to our YouTube channel and check periodically for the live videos of our concerts.  Additionally, our last blog post showed you some of the really cool pandemic posts that Captain Carl made.  Youtube yacht rock out.